David Jaffe is a liar. Do we care? 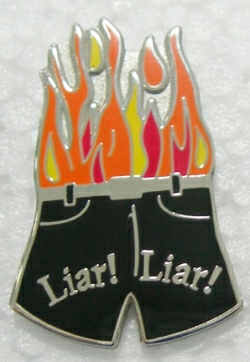 “[W]e are not making a new Twisted Metal altho [sic] I think doing one WOULD be fun…but we simply are not. Also a game by Eat Sleep Play will NOT be at E3 2010.”
-David Jaffe, to Joystiq, on May 24

“Hey everybody, I’m David Jaffe and this is Scott Campbell and we’re the co-founders of Eat Sleep Play, and we’re really excited to show you guys the next edition of the Twisted Metal franchise [for the PS3].
-David Jaffe, on stage at Sony’s E3 press conference, today

The above quotes prove David Jaffe is a liar. This is not up for debate. There is no way he could show this game off today and truthfully say he was not working on it on May 24. The lie is a fact.

Given that fact, how should we, as journalists, respond?

My first instinct is to respond with anger. Our goal as journalists, first and foremost, is to report the truth, and Jaffe’s lie forced us away from this goal. I suppose technically you could argue we still told the truth (‘All we said was that Jaffe said he wasn’t working on Twisted Metal. Which was true… he did say it!’) but in effect Jaffe’s lie made us complicit in misleading our readers regarding this game’s existence.

I know Jaffe’s lie doesn’t quite rise to these level of a lying politician or high-powered business tycoon, but even if we just hold him to the standards of our own profession, shouldn’t we at least have the deceny to never believe another word out of his lying mouth?

In a PlayStation.blog post that’s just gone up, Jaffe defends his lie by arguing it was all in service of the surprise reveal at the show. He wasn’t trying to maliciously lead us off the trail of his game’s existence, you see… he was just trying to maintain the “sense of surprise and discovery has all but vanished from the E3 experience.” (The post also suggests Sony urged him to lie to maintain the surprise, making them at least somewhat complicit in all this)

Sure, there were rumors suggesting both of these revelations, but there are rumors about all sorts of crazy things in the lead up to E3, and most members of the public have no idea which ones are going to turn out being true and which one are just so much hot air. There have been rumors about a Kirby game on the Wii for years, but they didn’t turn out to be true until this year.

Other companies, when asked to address rumors, almost invariably offer up a curt “no comment.” They don’t actively lie to the questioner (and, by extension, their readers). Instead, they just shrug it off and let everyone continue to do their job without obstruction. I know Jaffe knows how to do this — he did it with regard to this very question back in 2008, even adding an expletive for good measure. (Yes, I do recognize the irony of literally preferring a source offer up a “no comment.” Here’s how it works: When addressing a rumor, “the truth” is better than a “no comment,” which is better than “a bald-faced lie.” Still with me?)

Yes, Jaffe’s lie did help tamp down the recent rumors of the PS3 Twisted Metal game (rumors Jaffe himself helped start with his loose lips at this year’s DICE, I might add). But the lie didn’t remove the very question from all recorded history. Addressing a rumor with a lie is not a permanent solution. All lying does, in essence, is take the small problem of an inconveniently timed rumor and trade it in for the big problem of a plain-as-day lie in the very near future. Did you think we’d just forget about your previous statements? Did you think we wouldn’t care?

Maybe you did. And maybe we won’t or shouldn’t care. Maybe I’m being too sensitive and most of my fellow journalists don’t mind game makers actively lying to them. After all, Spong said they “expected that of [Jaffe]” after his lie was revealed. G4’s Andrew Pfister predicted Jaffe was lying just before the press conference started. Maybe I should accept that game companies are constantly lying to us and just loyally report whatever load of bull they hand us without worrying about whether I’m serving my readers or serving the companies I’m covering.

Personally, though, I’m not happy about our profession being used to willfully mislead people, even if it’s just in the service of “the sense of surprise and discovery.” I didn’t get into journalism to help maintain the timing of a company’s marketing plan. I got into it to report the truth. So I still get a little mad when liars prevent me from doing that. So sue me.

[Update: 8:34 a.m. BST, June 16 Commenter R Bee made an excellent point that I was probably too blinded by rage to consider in my original post. The takeaway from this is that journalists should continue to be extremely skeptical even of official statements from game makers. Especially game makers like David Jaffe.]